Catholic Extension has published Extension magazine since 1906. The publication has undergone many changes over the last century, but its goal has always been the same: to share with our donors and friends the stories depicting our mission to build faith, inspire hope, and ignite change in the poorest regions of the United States.

In its many years of publication, editors have often commissioned original artwork from talented artists. This was especially common in the mid-20th century. Focusing on the everyday habits of Catholics in modern life, these illustrations have cemented the personality, and even sense of humor, of an era.

Take a look behind the curtain at several of our favorite, unique covers that have delighted readers for generations.

In a nod to Ash Wednesday and the start of the holy season of Lent, resident Extension artist Stanley Biernacki’s illustration depicts a yearning for candy on the ash-marked faces of neighborhood children. The cover matches many themes in this issue of the magazine, in which a mother describes how she manages a household of sixteen children and a father muses over whether or not St. Joseph experienced the same fatigue he feels when confronted with his children’s never-ending energy, writing “The enthusiasms of childhood take no account of a grown man’s weariness.” 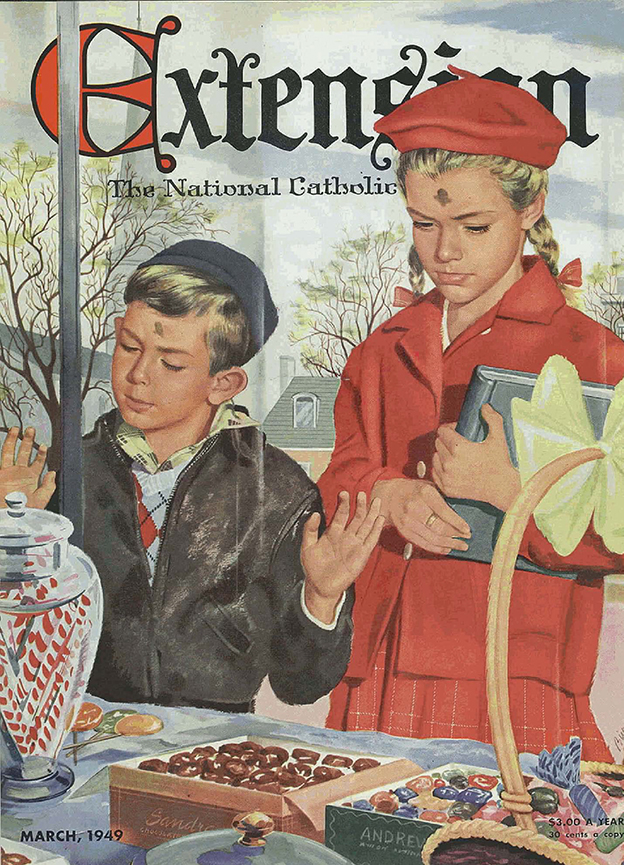 This cover, painted by Morgan Kane, accompanied the beginning of a new series of articles written in the magazine about St. Martin De Porres, a 15th century Peruvian lay brother who was beatified in 1837. The editors wrote, “we think you will agree that that it is a very fine painting.” Martin de Porres was canonized 13 years later. 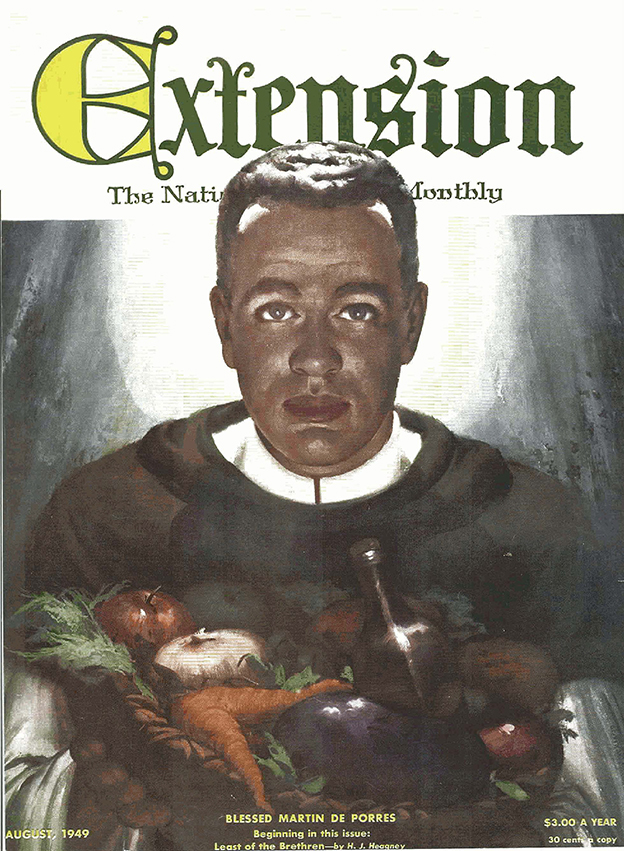 In this Taylor Lewis illustration, new parents have their hands full with a young one who does not seem to appreciate receiving the sacrament of baptism. Perhaps the child is among many who have Extension magazine to thank for bringing together the union of their parents — and, thus, themselves — into the world. This issue celebrated 23 years of The Chaperon Club, a letter-writing club for single Catholics started by Extension that produced more than 40,000 members, hundreds of marriages, and who knows how many children! 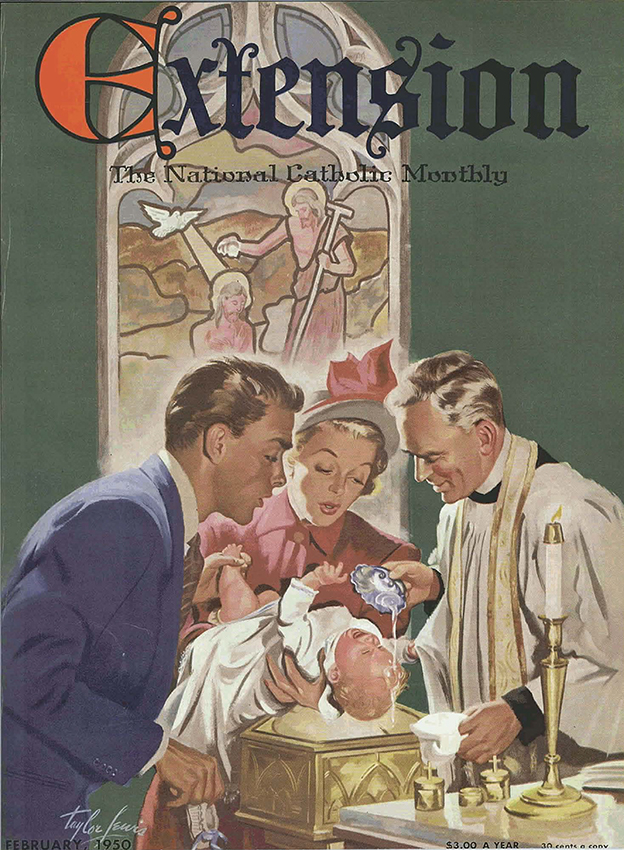 Famed artist James Lockhart painted this original Extension cover celebrating the joys and curiosity of childhood as America busied itself with households full of a young baby boomer generation. Lockhart decided to pursue a career as an artist two decades earlier when Franklin D. Roosevelt wrote him a letter of encouragement and praise after his sketch of the then-president reached the White House. Lockhart painted for publications such as Reader’s Digest and Saturday Evening Post, and several of his popular nature scenes now reside in the Smithsonian. 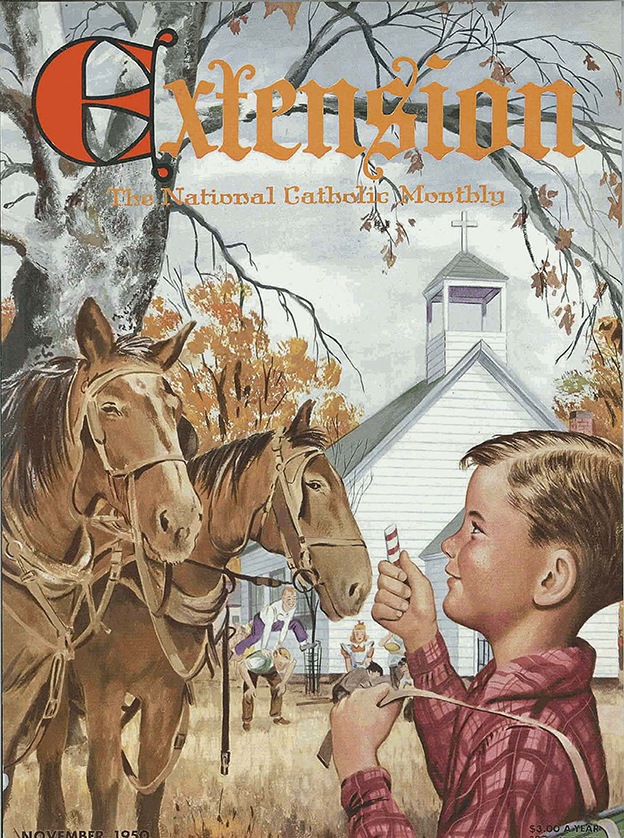 In the days of advertisements for $3 mail-order blouses and “less irritating” cigarettes — both of which are included in this issue Extension — artist Robert K. Abbett painted this cover featuring a boy kicking off the football season with some expert coaching. Just a few years later, Abbett moved to the countryside and became famous for his paintings of nature and wildlife, especially dogs. 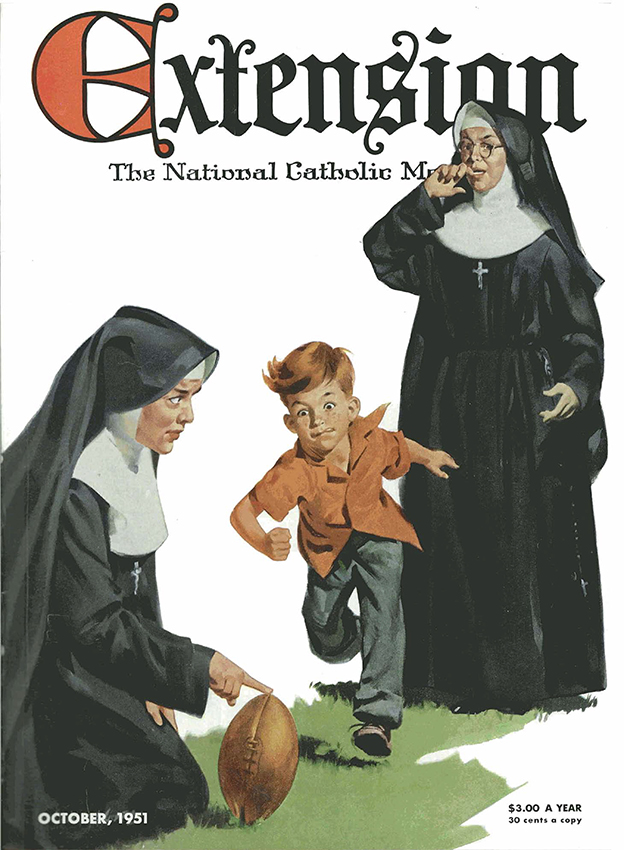 Extension editors wanted to convert this painting by Charles Miller into a holy card that would be carried by Air Force personnel. Unfortunately, there are no existing records to indicate if this desire was fulfilled. The accompanying poem was written by Simon Selas:

To Our Lady of the Air

When I climb into the blue,
Protect my plane, the pilot, too:
That as we’re conquering the skies
I shan’t forget the things you prize.
Dear Lady, let me rise above Myself and learn the One True Love,
So, when the flight plan here is o’er,
You’ll welcome me forevermore. 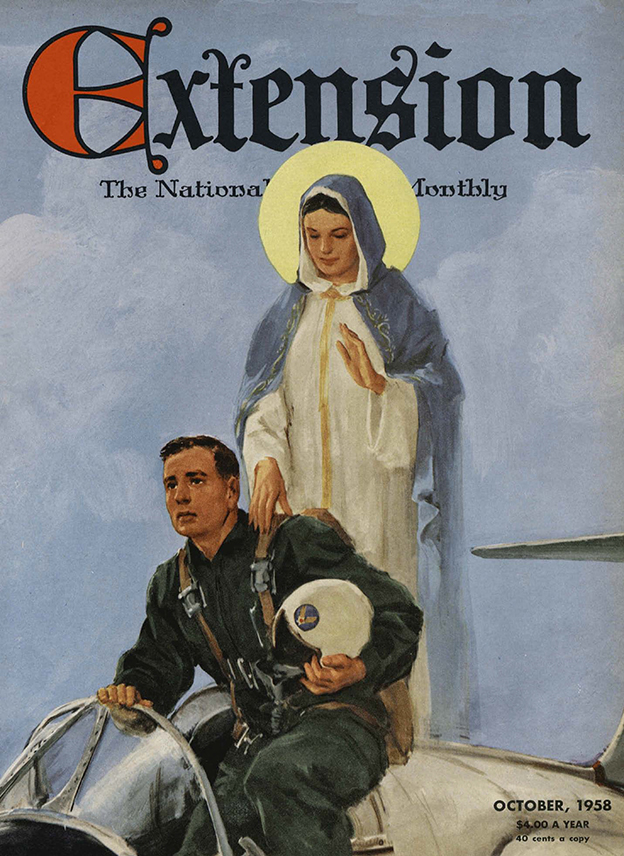 Artist Robert K. Abbett painted this tongue-in-cheek scene showcasing “too many cooks in the kitchen.” Readers saw a “Happy Thanksgiving” message from the editors and the artist, as well as advertisements for state-of-the-art “wireless wizards” — remote controls — and color TV sets. 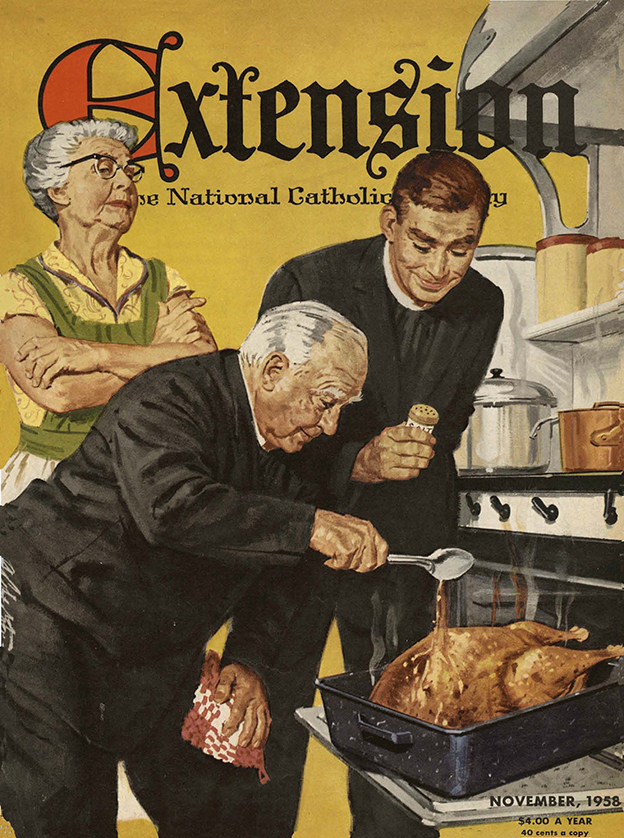 In this original Robert K. Abbett painting, the artist depicts a mission priest on a Sunday morning traveling from one church to another, trying to cover three churches before noon. The priest encounters some trouble on these mission roads. Extension editors wrote, “Where there’s snow, there’s a car in a ditch — most often it belongs to the man in the biggest hurry.” 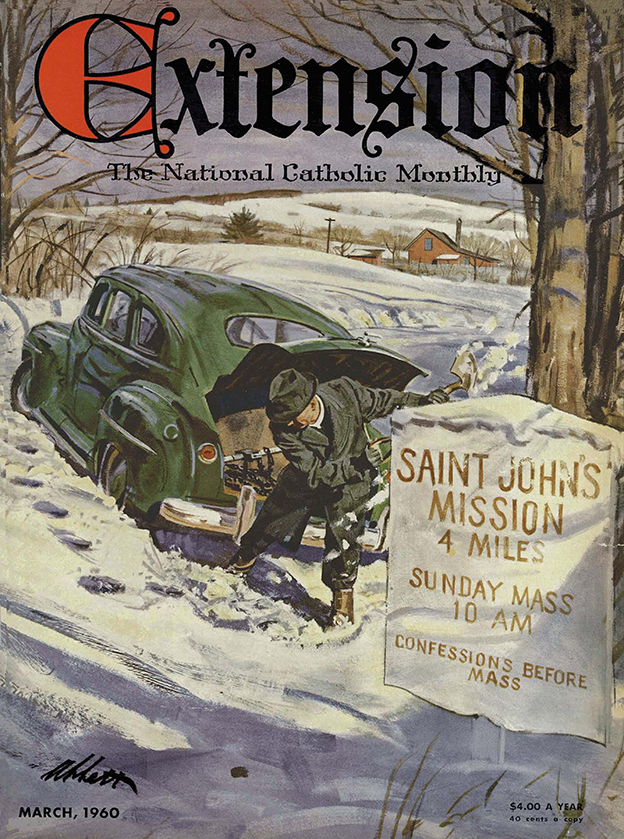 New at the time to the covers of Extension, artist Don Smith, with delicate color and precision, brought a little bit of the Old West alive for the enjoyment of magazine readers. Included in the magazine is this description: “It’s little wonder that our rugged cowboy friend stops a moment to contemplate the mysteries of the Rosary, when before him he is confronted with God’s great gift of Nature in all her beauty and serenity.” 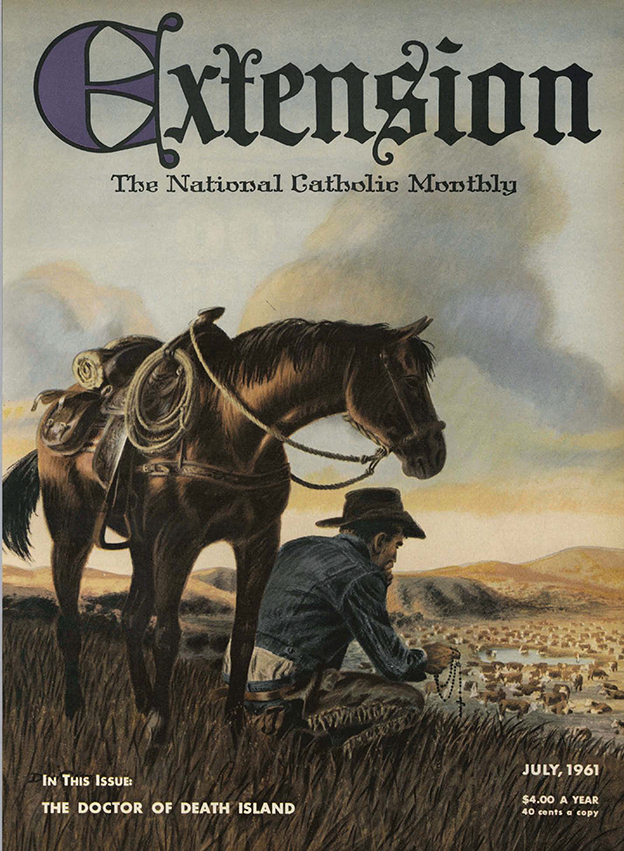 Artist Luke Doheny, with a few strokes of his skilled and imaginative brush, captured the joyous feeling of a young deacon fresh from the seminary in coming home for a visit and being met by a bundle of pent-up energy that contains all the memories of youth and home.

Within the pages of this issue, Extension editors wrote,“If dogs could talk, our overzealous tongue-licking friend on the cover could probably be heard saying, ‘Gee, pal, it’s been a long time, but I forgive you.’” 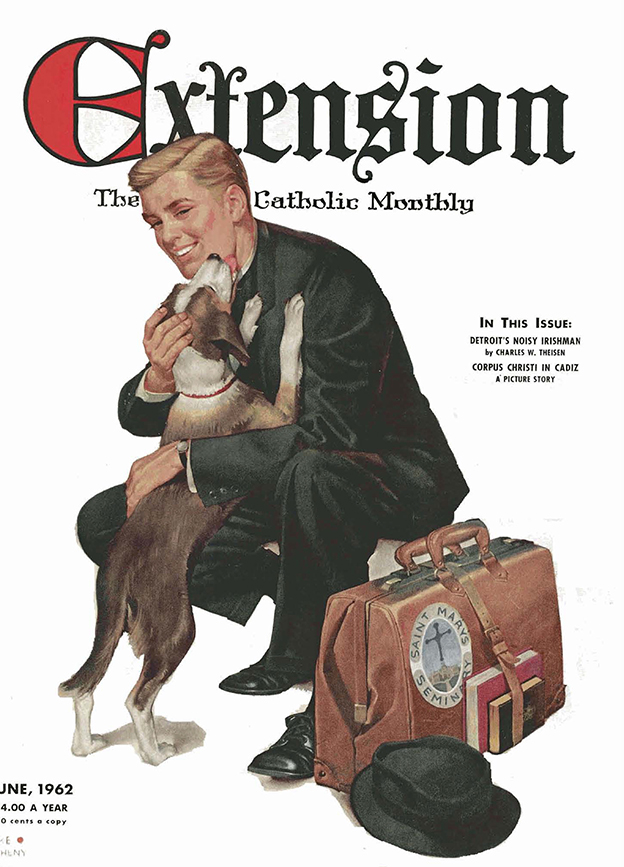 During the height of the space race, Extension magazine commemorated astronaut Leroy Gordon Cooper Jr.’s historic 22 orbits around the world with an illustration by Bill Blake, expressing the hope that the people of the free world would be the first to reach that foreign universe, and claim the moon with a cross and a rosary.

Cooper expressed his gratitude to God in this prayer: “Thank You for the privilege of being able to be in this position. To be in this wondrous place, seeing all these startling, wonderful things that You have created.” 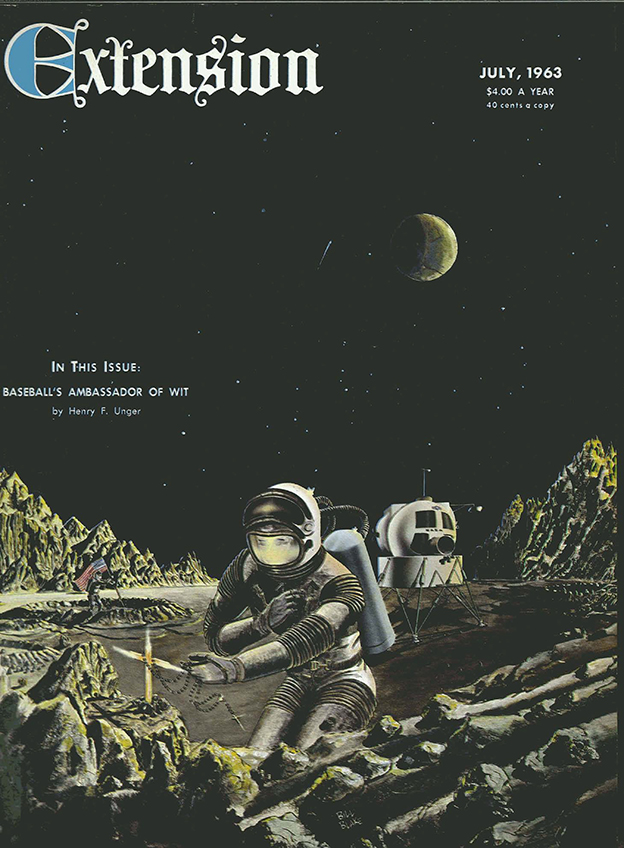 Extension magazine’s artistic inclinations have not ended; our 2019 spring issue features an original illustration by artist Wenjia Tang. Celebrating women in the church, the artwork depicts how a woman’s “feminine genius” —  a term coined by John Paul II —  upholds the Catholic Church. The illustrated women are designed after those featured in the magazine. 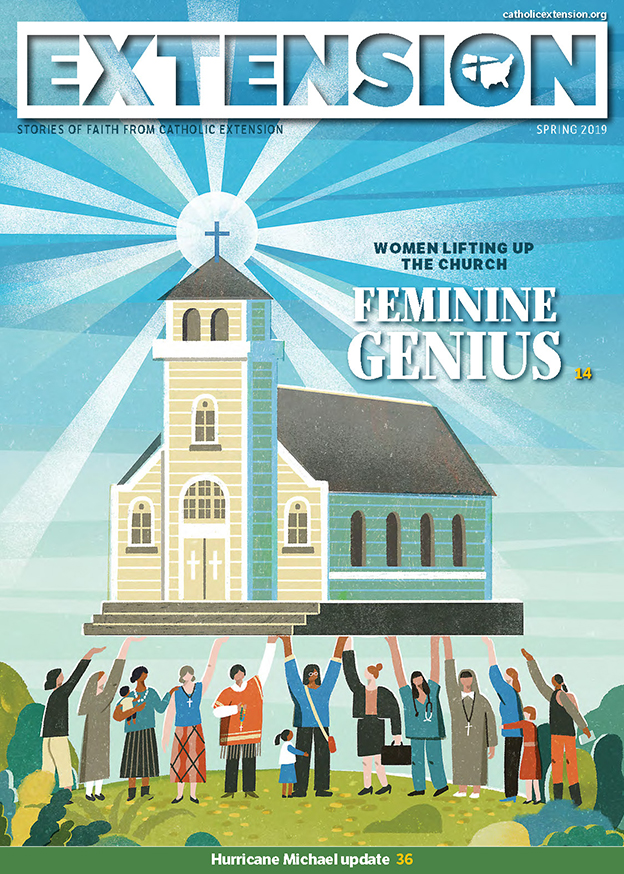 You can flip through the magazine, or sign up to get one free copy, here.