How to pray well this Lent: consult the poor

As we move through the final weeks of Lent towards the new light of Easter, the liturgy draws us into the very heart of the Christian story. In this annual pilgrimage, we meditate on the ancient penitential psalms, which have expressed the yearnings of the human heart for three millenia. These seven psalms, which have been used in the Church’s liturgy since at least the seventh century, give voice to our desires for right relationship with God even in the face of our sinfulness: “My Lord, my deepest yearning is before you; my groaning is not hidden from you” (Ps 38:10). We pray for the Lord to turn our hearts away from sin and towards goodness and generosity: “A clean heart create for me, God; renew within me a steadfast spirit” (Ps 51:12). And we call upon the Lord, who in his mercy is constantly “Heeding the plea of the lowly, not scorning their prayer” (Ps 102:18). 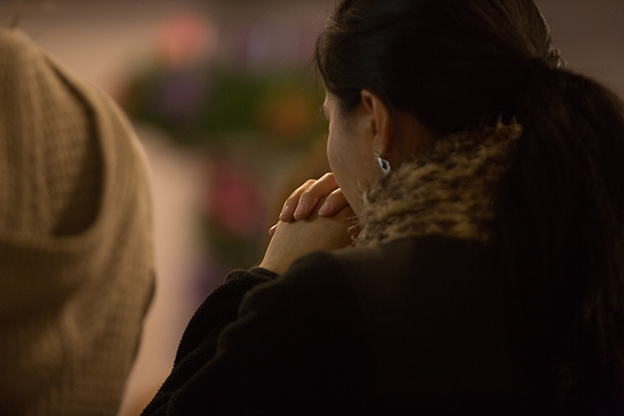 These psalms capture in miniature the whole of the Christian mystery: that in his compassion, God becomes one with us in order that we might not be left alone in our sin, but rather follow him in his death and resurrection to know salvation.

When we read the psalms through the lens of the people whom Jesus reached out to often in his public ministry—namely, the poor, the disenfranchised, the people left out of the mainstream society of his day, we see the way that Jesus himself sought to embody God’s mercy. Those on the margins know well the feeling of the psalmist who pleads that God will not scorn their prayer. The same is no less true today.

Often in my travels I have encountered men and women who, conscious of the way the world moves well beyond the borders of their small towns, are grateful for the chance to tell their story and relish, in some small way, the feeling that God hears their prayer. I recall a man named Roosevelt in Lake Providence, Louisiana, who recounted his memories growing up black in a very segregated and racially divided community.

As he described his childhood, I could see him knitting his brow, recalling viscerally the pain of the indignities that he and his family had suffered. There was an intensity in his narration which made me mindful of how important it was to tell his story. All I could do was listen and receive what he was sharing. He was grateful for the ministry of Sr. Bernie Barrett, who had lived and worked in the community, gathering people from different churches to address pressing social issues. It consoled me to know that Catholic Extension had supported Sr. Bernie’s ministry, which he described as a sign of hope.

Another time I was in the home of a family from Chaparral, New Mexico, as they shared their story of navigating the intricacies of the immigration system and caring for their special-needs daughter. They relied on the work of the Assumption Sisters, whom Catholic Extension has supported for years, as they served families like theirs in this area close to the U.S.-Mexico border. As her eldest daughter brought out sandwiches and lemonade, the mother described the pains she took to see to the developmental needs of her younger daughter, and the difficulties they had encountered in securing legal immigration status for all members of the family—some of whom were citizens and others not. She spoke of her faith and the importance of the Sisters, whose generosity led them to build a community where once there were only people living in isolation from one another. Like Roosevelt, this woman wanted to tell their story, to give voice to the yearnings of their hearts.

The Lord is constantly hearing the plea of the lowly, not scorning their prayer. Praying the Penitential Psalms during these last days of Lent can be a way of walking with them, and of entering more deeply into communion with Jesus. Lent recalls the forty days Jesus spent in the desert before he began his public ministry with the words “The spirit of the Lord is upon me, because he has anointed me to bring glad tidings to the poor” (Luke 4:18). Our mission at Catholic Extension is to support the many ways that the Church seeks to carry out Jesus’ ministry to the poor. We make the words of the psalms our own, identifying the place in our hearts where our deepest yearning is for the Lord; where we ask God to renew in us steadfast spirits; and where we, like Jesus, heed the plea of the lowly.