By Joe Boland
Catholic Extension
Share with your friends

The story of St. Thomas the Apostle, who disbelieved the resurrection until he could physically examine the wounds of Christ, is a timeless reminder that doubt is a common precursor to faith.

A recent study by the Pew Center found that many Catholics are experiencing doubt these days, particularly regarding ( 31% ) of Catholics are ready to believe that the Eucharist is the body and blood of Jesus. This figure is troubling given that our tradition describes this Sacrament as the “source and summit of the Christian life.”

But, as I recently found out, doubt can often lead to new faith.

I was sitting at Mass a month ago with my wife and kids as I do each Sunday. Only that week, looking around at the people in the pews, I thought to myself “If the Eucharist is real, then there should be at least some empirical evidence that those who receive the Eucharist are positively changed on the whole. I’ve never seen any such evidence. What does that say about the supposed power the Eucharist?”

Little did I know, this doubt would open the door to faith.

Only two days later, I found myself in rural Mississippi meeting with Guatemalan immigrant families, all of whom had been impacted by the largest statewide ICE raid in U.S. history this past August. Catholic Extension has been instrumental in providing resources to the churches that are serving the humanitarian and spiritual needs of these families whose lives have been turned upside down.

I met a parishioner at St. Anne’s in Carthage, MS, who as a breast-feeding mother was separated from her children for more than a month after being swept up by ICE in the chicken processing plant where she worked. Every day while in detention, she gathered together with her cellmates, and asked God that, if it be his will, He may allow her to see her children again, including her bright-eyed infant struggling to eat in her absence. 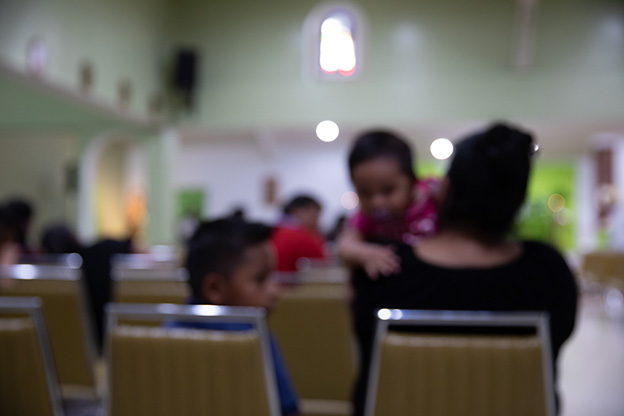 I met a woman from another parish 35 miles away. She was told by officers she would be released on the day of the raid because she had no criminal record, but was instead confined to detention for nearly two months. She prayed unceasingly at the out-of-state detention center where she was held, thanking God for her life and each new day. She told me that some of her cynical cellmates told her, “Can’t you give father God a rest already?”—something she refused to do.

Finally, I met a man who introduced himself as a eucharistic minister at a poor Catholic mission in Morton, MS. His day job had been butchering and packing 2,000 raw chickens a day. He was released after two months in detention, where he endured many humiliations, including being denied toilet paper and being threatened to have his phone call privileges revoked. As he spoke to me, he was tenderly feeding a bottle to his infant daughter. By the end of our conversation, she peacefully fell asleep in his arms. I noticed that he was not bitter about how he was treated, but rather profusely expressed thanks to God for his family and gratitude to Catholic Extension for our willingness to help people like him.

I was dumbfounded by these parishioners’ gratitude in moments of unimaginable hardship. I am aware that the Greek root for the word Eucharist means “thanksgiving.” I’ve also heard it said that the Eucharist is the Catholic equivalent of our “Thanksgiving dinner,” where we come to the table with hearts of gratitude.

It was no coincidence, I thought, that just as my mind was demanding empirical evidence of the power of the Eucharist, I encountered a eucharistic people in Mississippi who displayed an extraordinary ability to give thanks to God in all things, even from the bowels of a detention center.

This was a modern-day eucharistic miracle, I concluded. And like, St. Thomas, my doubt looked a little silly in the face of God’s awesome power.

Last year, I traveled to the Cathedral in Orevieto, Italy, which houses evidence of the 13th century Eucharistic Miracle of Bolsena. There, I learned that eucharistic miracles follow a certain pattern. A person has doubts about the Sacrament, followed by an overwhelming display of evidence, followed by a resurgence of faith. This was the same pattern for me.

Only instead of seeing a bleeding host, as was the case for the doubting priest in Bolsena, it was the bleeding hearts of God’s people and the overwhelming witness of faith among these meek, mourning, and justice-thirsty Catholics that convinced me of the potency of the Eucharist. They taught me that the Eucharist indeed strengthens us and embeds Christ so firmly in our hearts that we can withstand any persecution, confront our poverty, and face our pains with hope. 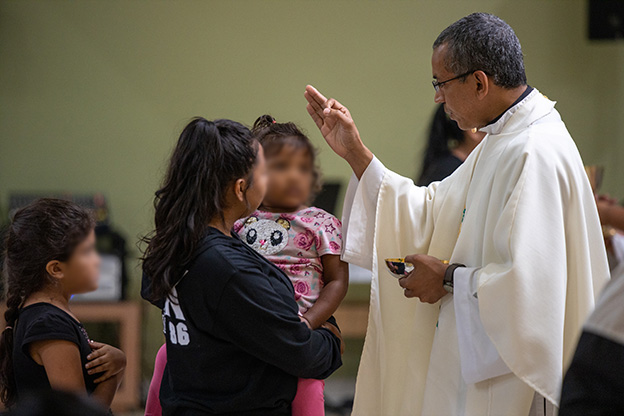 I will be back in Mississippi on December 20. Catholic Extension is sponsoring the pastoral visit of the newly elevated Cardinal and human rights champion, Álvaro Ramazzini of Guatemala. He will be visiting the parishes hit hardest by the raids, to give comfort to these hurting families.

Before he arrives, I will let the Cardinal know that he is going to encounter a eucharistic people whose courage and resolve are evidence of the power of this Sacrament of thanksgiving and its authenticity as a channel of great grace to God’s people.

Joe Boland is the vice president of mission for Catholic Extension, whose mission is to work in solidarity with people in America’s poorest regions to build up vibrant and transformative Catholic faith communities.

Catholic Extension established the Holy Family Fund, a relief program that was established by to assist low-income families in the U.S. who are financially dependent on a parent that has been detained or deported for immigration reasons.